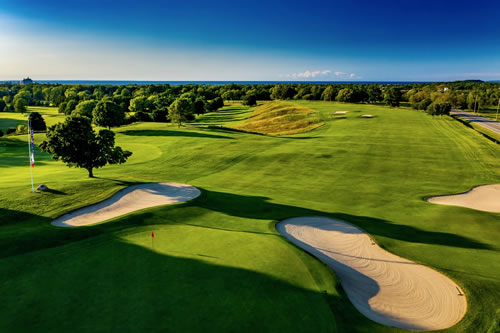 It’s notable that Watson, while well-educated Scot who cherished the sensibilities and subtleties of the Old Course at St. Andrews, was not bound by many of the prevalent design constructs other architects of his era frequently used, like programming specific template holes into his routings. “(Watson) never practiced a cookie-cutter approach to design. All of his courses were different. His bunker style was totally different from course to course. He was terrific in using the land’s natural features, but he was also skilled at creating features when needed,” architect Todd Eckenrode-- who has teamed to restore six courses where Watson was the original designer-- recently told Morning Read’s Joe Passov.

That being said, the closing stretch at Harding Park, while in a different topographical setting and lined by mature cypress trees, does bear some resemblance to Belvedere, at least in its routing. Both courses feature short par 4s with their sixteenth holes. Harding Park’s 16th is a 336-yard risk-reward opportunity that doglegs right a bit with bunkers left and an overhanging cypress that can come into play. A conservative tee shot leaves a wedge approach to one of the course’s most befuddling greens. At Belvedere, the uphill pitch to the 16th hole means the short hole is no pushover while a semi-blind approach to the long, narrow green (over a false front, no less) can be one of the most nerve-wracking shots of the round.

Both courses save pleasing par 3s for their penultimate holes. At Harding Park, the 17th plays 171 yards from the tips and is guarded by sand traps on either side of the green’s front. By contrast, Belvedere’s uphill, one-shot 17th allows for more strategic options- either a full carry or a more driving trajectory that uses the right slope to feed the ball toward the hole on the Redan-like green.
Harding Park and Belvedere both call for exacting tee shots on their finishing holes that avoid the left side and favor, but miss, fairway bunkers on the right. Harding Park’s lengthy 480-yard, par-4 closer is bordered by Lake Merced on the left and its approach plays into an elevated and challenging green. Similarly, the finish at Belvedere’s 456-yard bruiser of an 18th also presents a green complex where missing the green can leave some vexing and thought-provoking situations, depending on the pin placement found on it delightfully uneven surface.

Eckenrode’s conversation with Passov yields more insight into Watson’s singular approach: “He wasn’t afraid to play along a sweeping hillside or up and over a ridge. He understood how to align a golf hole that would take maximum advantage of the contours and kickslopes and would reward a player who could figure that out. He had a wonderful way of using diagonals, of rewarding the player who recognized the proper angle,” Eckenrode explains. “(Watson) holds the belief that a course is more interesting if every green has a character all its own, giving the player something besides the flag to rest his eye on in approaching the hole.”

In his own words, Watson once wrote on maintaining naturalness in his work: “A good rule is to stress the importance of fitting in all grading work to harmonize with the surrounding territory,” Watson wrote. He further asserted, “Mounds, slopes, grassy hollows, sand pits, all have their values in beautifying the setting of our greens and in giving them distinctive definition — if artificially arranged without appearance of artificiality.”

Watson’s words ring true as one plays Belvedere, where that gentle commune with nature remains a part of every round and the features on the ground reflect the flow and beauty of the land. While the PGA Championship at Harding Park will feature plenty of bombers and modern approaches to this ancient game, it will be fun to see examples of pros using the ground’s contours and the distinct design angles Watson intended to see endure at Harding Park. Nearly a century after Watson’s peak creative period, he still inspires golfers with bold, creative and strategic design elements that can be found in designs as similar- and as disparate- in their DNA as Harding Park and Belvedere.