BELVEDERE GREENS IN NORTHERN MICHIGAN, AMONG THE COUNTRY’S BEST BY WILLIAM WATSON

When it comes to ranking the best green complexes in the country, the first courses that come to mind are always Augusta National, Oakmont, Oakland Hills, Winged Foot, and even Crystal Downs in Northern Michigan. Well, another course in Northern Michigan can also claim to be part of that conversation, Belvedere Golf Club in Charlevoix, Mich.

In 2016, officials discovered Watson’s original 1925 plans during a local building demolition. The plans revealed how the green complexes used to be much larger with more slope around the edges. Club officials took immediate action.

Course architect Bruce Hepner of Hepner Golf Design, who had been working with Tom Doak’s Renaissance Golf on subtle renovations of Belvedere for the past decade, used the long-lost blueprints as a basis to restore the greens to their original size and shaping. The greens are now notably popular among golfers. And while they essentially shrunk over time, much more was revealed during the restoration process.

“The drawings validated what was in the field,” says Hepner. “You could see the outlines or the actual shaping of the greens -- the plateaus were out that far. You could also see that the greens had shrunk that much. When I first started working there 20 years ago making modifications to the course, they were like small little circles inside these big rectangular greens. We did the green restorations in two phases -- starting by mowing the surrounds, and early on expanding the greens as much as we could. Then once we saw those drawings, it validated that the greens went out that far on those field pads. So that definitely gave us the guide.”
Hepner says it's the variety that ma 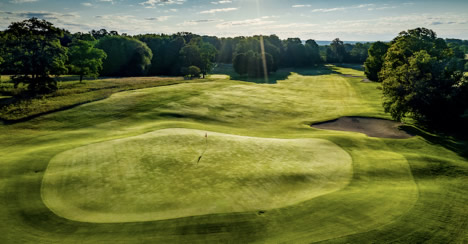 kes the greens unique, citing that Watson accomplished three key things at Belvedere. First, he found great green sites with plenty of variety -- some are high up on ridges, some are low, some are side hill. For instance, the first hole falls to the left, the 16th to the right, and the 12th falls away. Secondly, the shaping around each green site made each one unique.
“Here’s the brilliant part of it: When you have a hillside green, you don't want the water coming off the hillside under the green,” says Hepner. “So, he created drainage swales around each green site, and used them in different ways to create interest and variety to divert the water away from the greens while also creating interesting contours in the shaping. Like at the 11th green, he's got a swale going around the right-hand side about 30 yards out in the approach and then through the left side of the green he brought the swale in the green and then has it exit out the front left. And that just gave all these interesting looks and varieties of putting surfaces, just by using swales and the surrounding shaping.”
“Finally, there’s variety to the internal contours. Every green has a distinctive personality. Says Hepner: “You go from the giant 18th green that has probably 10 little moguls in it to the little 16th green that's devilishly hanging out up there that the ball can roll off in any direction, or the 8th hole, a great uphill par 3 utilizing a skyline green with the putting surface as the horizon with several bumps and fall offs around it. So it's the variety in all different categories that Watson applied that makes it feel special.”
That made Hepner’s job relatively easy. He used a paint gun to define where the original greens were, 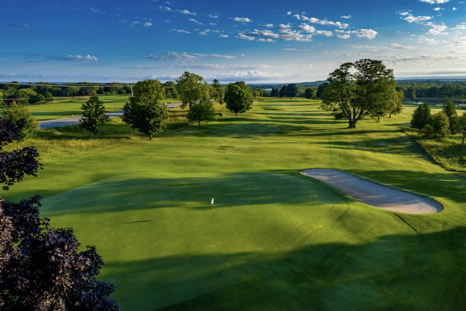 and then it was a matter of mowing the greens down at a slow pace over three years -- from collar height and then gradually lower -- to get them down to putting surface quality. The team sodded some areas, as well. And now they're seamless -- golfers can't even tell where they were expanded.
Hepner says the changes definitely affect scoring and strategy, calling it good old-school golf -- the ground dictates where the ball’s going to roll. Watson used the swales and architectural features so that if you wanted to run the ball in a certain spot, you'd have to run it through a swale. It’s very Scottish links-like. “Each hole he used the swale in a different direction, or distance from the approach, or to the side of a green, or the ball will fall off,” he says. “When we mowed all the short grass around the greens, that's really when they came alive because the ball rolls off the putting surface down into a swale. If it's not in the rough, it's in the short grass and then it just keeps rolling and those cool swales and shaping around the greens come into play on the recovery shot. It's just brilliant. I've taken so many architectural friends there to study those greens because they’re that good.”
For the most part, the greens are crowned -- but those mounds and swales continue 30 yards away from each green. Most architects would just stop right at the base of the green. Not Watson. Experts say that secondary shaping makes them quite unique -- unlike at any other course.
During the process, Hepner says he learned as an architect that form follows function. Where Watson created those swales is an engineering masterpiece -- they divert water while also being 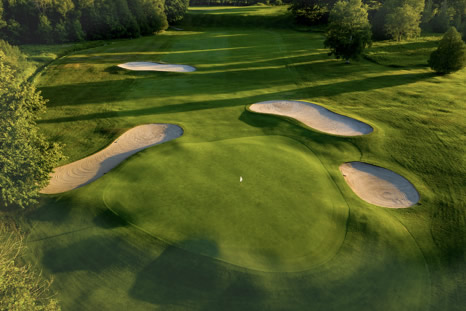 part of the golf experience. “This is how you build a green on a hillside,” says Hepner. “You just don't bench it in, you tie it in. That's the great lesson of Belvedere -- how Watson tied those greens into the native grade without making it look artificially built. The biggest key Tom Doak’s always taught us is to figure out why the great courses are good. Generally, why they're so good is how they utilize that piece of land and apply golf to it. Belvedere is a great example of how to build green sites.”
Ranked on Golf Digest’s biennial America's 100 Greatest Public Courses list in 2019, Belvedere has hosted the Michigan Amateur for 40-years, as well as the US Hickory Open. The course has long been a favorite of many golf greats, including legend Walter Hagen, who won the first Great Lakes Open at Belvedere, and five-time British Open winner Tom Watson, who as a youngster honed his game playing summers at Belvedere. He remains a member today and loves to return to play the before mentioned 16th hole, which he describes as one of the great par fours in America. Belvedere is pure golf as it was meant to be played.